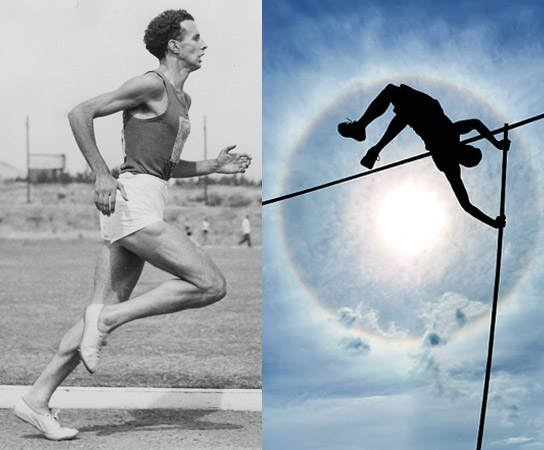 On a hot Saturday afternoon in 1954 I was representing the Malvern Harriers in the ‘C’ pole vault at the Victorian Amateur Athletic Association’s (VAAA) weekly inter-club meeting at Olympic Park. A skinny young Geelong Guild runner named John Landy was leading the ‘A’ grade mile field by 30 or 40 yards. The bell signaling the final lap sounded. An excited official announced ‘Landy has gone through in under 3 minutes…he could break the four-minute mile’. Landy left his opponents in his wake but failed to break the four-minute barrier by a couple of seconds. Nevertheless the once thought impossible dream was now clearly within reach. The VAAA pulled out all stops to create opportunities for Landy to be the first to achieve it.

The enterprising Malvern Harriers arranged a twilight meeting at the Malvern Cricket Ground in March 1954 the feature event of which would be the Mile. The field contained the cream of Australia’s middle distance runners whom VAAA officials hoped would push Landy to the limit and hopefully he would shatter the magical four-minute barrier.

As a 15 year-old junior pole vaulter and schoolboy I was beside myself when the club president gave me a place in the invitational pole vault that was part of program. I joined leading Victorian and interstate athletes, including the current Australian pole vault champion.

The big night arrived. Several thousand people descended on the Malvern Cricket Ground to cheer Landy on and hopefully witness history being made. The pole vault pit was set up in front of the packed grandstand. My family and a number of local friends and schoolmates were seated in the front row. I protested to officials and the other competitors when they asked for the bar to be set at 11 feet 6 to start the event. ‘I’ve never been over more than 10 feet…can’t we start lower?’ Grudgingly they agreed to start at 10 feet 6. All ‘passed’ the first round leaving me – a 5 feet 4 inch, slightly overweight teenager – to take the first ‘jump’.

With aluminum pole gripped high I tore in at full tilt. I drove the pole into the slide and swung up hard. My legs and backside swung up over the bar but I had insufficient momentum to ‘push off’ away from the pole. I came down heavily on the crossbar snapping it like a stick of spaghetti. A minute later my second attempt mirrored the first. The club’s second and only other crossbar was similarly destroyed. Grinning broadly I stood in the pit and flexed my muscles. The good-natured crowd went wild. The other competitors were less than happy when the event was abandoned. The Harriers club president refused to speak to me.

I broke two crossbars that night while Landy failed to break four minutes for the mile. Nevertheless, he became the second man to go under 4 minutes a few months later when he created a new world record for the mile of 3 minutes, 58 seconds. The record stood for three years. I never competed again in a pole vault event. Anywhere.