Growing up in Malvern 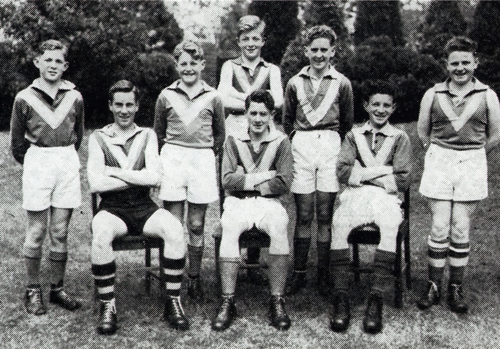 Our family moved from North Melbourne to Malvern early in 1943.  Three tumultuous years during which our dad had been involved in a series of stressful court appearances, had preceded our move.  The family funeral business was growing rapidly and our parents decided to make a fresh start. It proved to be a good decision.

Our family – mum, dad, my older brother Barry (7) and me (5) moved into a large, comfortable home in quiet Grace Street located close to our parish church, schools and shops. Our siblings – Denise in 1944 and Gavan in 1946 – came along to complete our family.

Barry started school at De La Salle College and I attended St Joseph’s primary school.  Every morning we stood in line for morning assembly before moving to our classrooms.  The flowing veil attached to the headgear of our teachers black religious habit, brushed against us as she checked the line and admonished those who were ‘not standing up straight’.  One morning I stuck out my hand as she marched past.  She kept walking.  I was left holding her veil and headgear.  The young nun with cropped hair exposed was furious, the mother superior – the imperious Mother Annunciata – dressed me down, my parents were embarrassed and I learned a lesson in keeping my hands to myself.

There were kids galore in Grace Street.  We played street footy and cricket and Brucie Doolan’s mum held a kids concert every Christmas.  Brucie was a self styled magician and a fairly ineffective hypnotist. And on one Christmas morning he ‘borrowed’ a wheelbarrow I’d got for Christmas to carry home the presents he’d brought to show Barry and me.  The wheelbarrow was later found under Brucie’s bed!

The Malvern gardens became another playground – especially during the war when the local council had three air raid shelters sunk in the park’s lawn.  ‘Enemy’ German and Japanese soldiers were defenceless against the Grace Street ‘Diggers’ and were shot or captured with ease.

At 13 I made the De La Salle swim team as a diver. As the annual combined catholic college swimming carnival approached, Brother Stanislaus told me I was to represent De La in the under 15 dive – even although I was still eligible for the under 14 event.   ‘Stani’ told me that De La’s star under 14 diver Billy Charlesworth ‘was sure to win and if you can pick up second or third place that will help the team’.  As it happened Billy finished second (in the under 14) and I managed to win the under 15 event.   And for the first time in a decade De La won the carnival.

Scholastically however I appeared to be going nowhere.  Mum’s brother Kevin Crough (a Christian Brother) suggested I was probably best suited for a ‘trade’ and suggested I sit for the entrance examination for St Joseph’s Technical College, Abbotsford.  I passed the exam and started at Abbotsford at the beginning of the 1953 school year.   A new and challenging chapter of my life began.