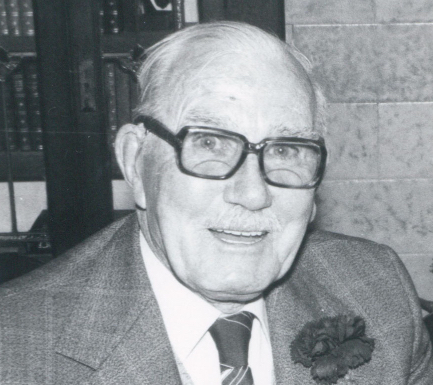 The life of Phonse Tobin was anything but ordinary. Born in 1905, he followed on behind soldiers as they marched to the wharves to depart for WW1. He earned pocket money by trapping rats and collecting the South Melbourne Council’s rat bounty, and almost ‘haunted’ the Collins Street movie and live theatres.

After leaving school in 1919 he worked as a storeman, salesman, soldier and fireman.  In 1934 Phonse and his brothers Leo, Tom and Kevin started what has become Australia’s most successful family-owned funeral service company.

A natural entertainer, Phonse possessed a fine singing voice and produced many amateur theatrical productions in the 1930s. He was a good all-round sportsman and a successful professional footrunner. He was a long-serving member of the North Melbourne Football Club committee and was the club’s president from 1955 to 1957. He was a life member of both the NMFC and the VFL (now AFL).

Phonse married Vera Crough in 1935. They had four children and their direct descendants now number 38.

Phonse was one of those rare characters who could meet, communicate and be at ease with people of all classes and walks of life – from prize fighters to prime ministers, from ‘mug’ punters to wealthy publicans or bookmakers, from Knights of the Southern Cross to knights of the realm, from everyday parish priests to ‘princes’ of the church, and from grave diggers to governors.

Like everyone else, he had his failings. But these failings – such as they were – were more than offset by his strength of character, generous spirit, creative flair, kindness to people in need, and his love for and undying support of his family. This was a life that truly made a difference.