What’s Been On My Bedside Table 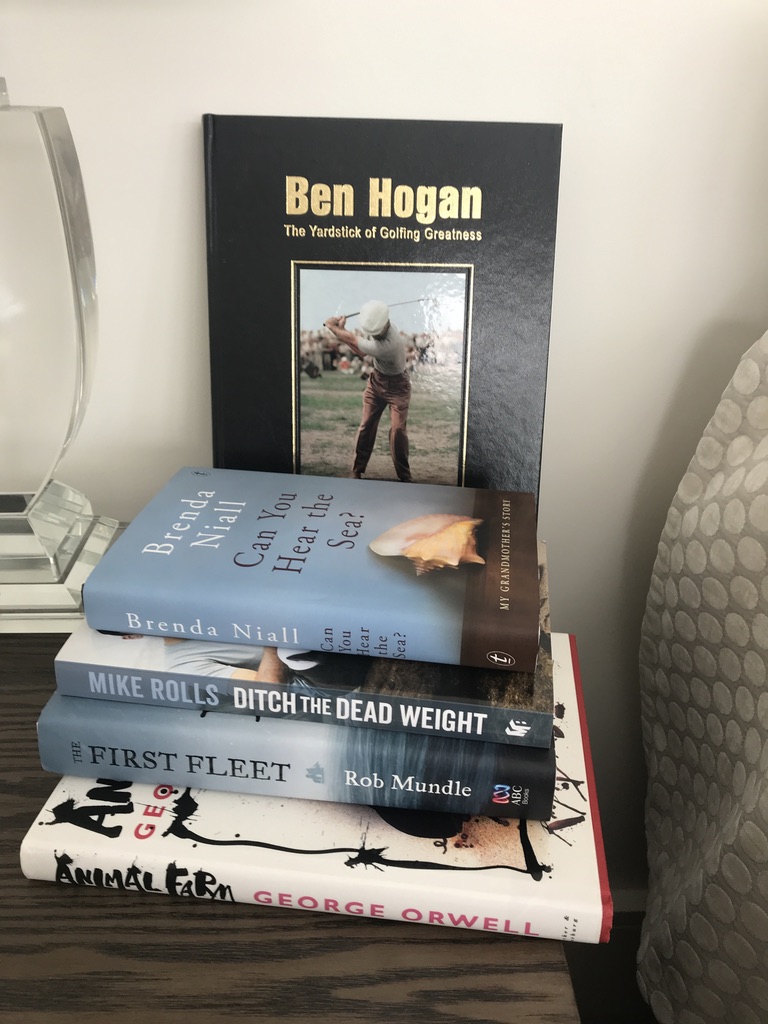 I can’t say that I often read in bed. I prefer the comfort of an easy chair with quiet, reflective music playing to soften the silence but not to distract me, and a glass of a good Shiraz close at hand.  Metaphorically speaking however my ‘bedside table’ has held some very interesting material over recent weeks and months.

Paul Daley’s Ben Hogan – The Yardstick of Golfing Greatness – is a golfing gem.  So much has been written about the chain-smoking, obsessive, nine-time major golf champion that we could be forgiven for thinking there is nothing left to be said. Yet Daley manages to bring fresh insights into the enigmatic Texan’s life and character and has added value and substance to the Hogan legend.

At the heart of Rob Mundle’s The First Fleet is the account of the extraordinary seamanship of the masters and crews of the eleven ships that made up the First Fleet.  They withstood all that the elements and human disaster could serve up to them.  After 17,000 nautical miles and 252 days at sea, to arrive in Sydney Cove in January 1788 – with all ships intact and with little loss of life – reveals much about the character, courage and skill of Arthur Phillip, his officers and their crews.  Mundle’s riveting story makes for compelling reading.

In terms of overcoming adversity, few stories can match that of Mike Rolls the sports mad teenager who contracted the deadly meningococcal disease on a football trip, lost his right leg, half his left foot, two fingers and part of his nose and suffered extensive internal injuries. After living with a leg that refused to heal for eight years, Mike took the agonising decision to have it amputated.   Now an inspirational public speaker and an ambassador for Interplast Australia and Limbs 4 Life, Rolls mentors and counsels young people after injury or illness.  A low single figure golfer, he has represented Australia in the World Disabled Golf Championships. In his recently published book Ditch the Dead Weight, Mike tells his story with candour, humour and insight.

In recent months I have also revisited one of my all time favourites – George Orwell’s Animal Farm.   Through the fantasised events that occur when a group of pigs, overthrow a farmer and rename his property Animal Farm, Orwell’s masterpiece satirises the Russian revolution and the rise of the Soviet Union. The pigs proclaim that all animals are equal – but some are more equal than others – and they build a cruel dictatorship, based on a cult of personality and enforced by a reign of terror.  Animal Farm remains as vivid and relevant today as it was when first published in 1945.

My most enjoyable ‘read’ this year however has been the exquisitely written Can you hear the Sea by one of Australia’s most gifted writers Brenda Niall.  In Can you Hear the Sea, Niall focuses her biographer’s attention on the life of her grandmother Aggie, a strong, independent woman who taught in country schools before marrying into a large and powerful grazier family in the NSW Riverina.  This is the story of a calmly determined woman who made her own choices and whose life has had an enduring influence on her descendants.

That’s what has been on my bedside table.  What about yours?