‘Placid Pete’ Memories of the golfer and the man. 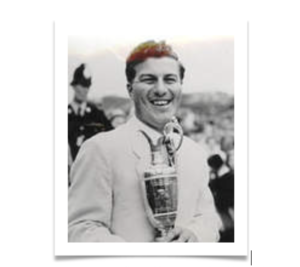 ‘Placid Pete’
Memories of the golfer and the man.

As a young man my uncle, Kevin Tobin was a single figure golfer.  He played at Northern Golf Club every Wednesday and Saturday for decades.  The rules at Northern were simple. If you booked a game, you turned up and you played.  Rain, hail or shine.

Kevin had a friend who was a Royal Park GC member where Peter Thomson learned the game.  ‘We have a lad at our club’ he told Kevin ‘who’ll be a world champion one day’.  When Kevin expressed his doubts, his mate refused to let up.  ‘You mark my word, this boy will even win the Open Championship …his name is Peter Thomson… don’t forget it’.

I first met Peter Thomson around 1949 when my dad brought him home after he and Peter played together in a golf ‘trade’ day.  I was about 11 and the 19 or 20-year-old -Thomson was on the cusp of his glittering golfing career.  He was shy and reserved but extremely polite and respectful of my mother.

Years later I watched him in a tournament at Royal Melbourne.  I was standing next to a cavernous greenside bunker beside a Par 3 hole and was surprised when ‘Placid Pete’ – as he was widely known – put his tee shot into the bunker.  ‘He’ll have trouble getting up and down from there’ said the bloke next to me. But he did. In one shot.  He picked his ball out of the hole, acknowledged the cheering crowd and walked jauntily off the green. The man was a magician.

Later in life I met him at various golf related events and functions.  I could never claim to have known him well but I was flattered that he always remembered my name.  That is, until our final encounter in 2017. I was in Cabrini Hospital pharmacy when a frail looking but impeccably dressed Thomson came in. By then his memory for both faces and names had deserted him.  He accepted my outstretched hand but gave no hint of recognition.   I felt sad – not because he didn’t know me – but that he was afflicted thus.  He died about nine months later.

Champion golfer Michael Clayton has described Peter Thomson as a ‘god among golfers and a prince among men’.  Hundreds attended his public memorial service at the Melbourne Cricket Club that followed a private cremation.  The many tributes were sincere, heartfelt and at times, funny.

Between 1947 and 1988 Peter William Thomson, OA, CBE, won over 100 tournaments worldwide.  Included in his victories were five Open Championships.  Kevin Tobin’s mate would have felt vindicated.  Here was a true world champion.

Thomson was indeed a golfing magician and he was a gifted writer. Yet he never regarded golf playing as ‘an art at which one can demonstrate one’s gifts’.  ‘Golf’, he wrote ‘is a craft, a trade, a profession and prizefight all in one. The total picture when we are all set loose is a circus of performers at each other’s throats….it is a lesson in human relationships, human idiosyncrasies and failings.  It is a broad picture of life itself.’