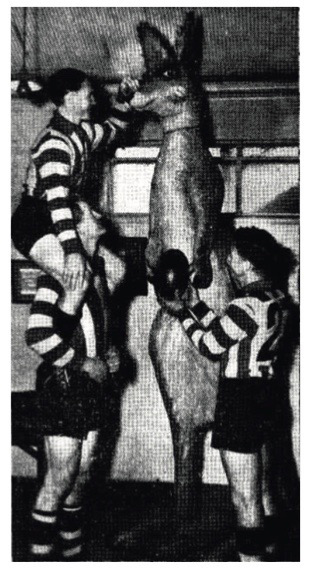 Throughout his time as a NMFC committeeman, Phonse Tobin detested North Melbourne being referred to by the media, some of its football opponents and even some of its supporters, as the ‘Shinboners’. He thought the nickname carried unsavoury connotations and implied that the players niggled their opponents with snide kicks to their shins behind play out of the umpire’s sight.

The origin of the name remains obscure but the likely explanation of how the ‘Shinboner’ nickname was coined is because a number of North players worked as ‘boners’ at the Melbourne Meat Market in North Melbourne and the nearby Kensington abattoirs.

Determined to make a change, Phonse favoured the name ‘Kangaroos’, which he thought portrayed an image of strength, swiftness and resilience, and was indicative of how North Melbourne played the game.

The Queen made her first official visit to Australia in 1954. She was the first reigning monarch ever to set foot on Australian soil. The country went wild.  In Melbourne’s CBD, buildings and landmark locations were appropriately decorated. On the parapet above its Bourke Street store G.J. Coles had erected a massive mural depicting an Australian bush scene that included a 3-metre-high, papier-mâché Kangaroo.

The mural gave Phonse the inspiration he was seeking to reinforce the Kangaroo image for his club. He contacted Coles and asked if they would donate the mural’s kangaroo to NMFC after the royal visit.  Coles agreed, and the giant kangaroo took up a commanding position in a corner of the players’ change rooms below the grandstand at Arden Street. From then on North Melbourne was officially known as the ‘Kangaroos’.

In an effort to raise funds for North Melbourne’s end-of-season players trip, the club had its new mascot mounted on a flat base with wheels saved from a discarded pram. At half time at North’s home games, a team of volunteers somehow managed to get the giant ‘Roo on to the oval. They would then lead it around the ground ahead of a blanket held by a volunteer on each corner. Spectators flicked their spare change into the blanket in support of the players’ trip.

After occupying its spot in ‘the rooms’ and doing laps around Arden Street for a number of years, the papier-mâché kangaroo fell into disrepair. The time came for it to be ‘retired’, but the Kangaroo nickname endured.  The club later ‘reinvented’ and gave new meaning to the term ‘Shinboner’. Being called a ‘Shinboner’ became to be regarded more as a badge of honour than a derogatory slur. It identified ‘Shinboners’ as people of character and commitment and aligned with the ‘never-say-die’ spirit that typifies North Melbourne. The term now carries a certain dignity and pride.

In 2005 NMFC celebrated 80 years as part of the VFL/AFL.  All past and current players were allocated a Shinboner number in order of their first senior game with the club. Each received a personalised ‘Shinboner Edition’ print of artist Jamie Cooper’s The North Story. The honour of being recognised as a genuine North Melbourne Shinboner was apprecoated by all.

In spite of his earlier distaste for the Shinboner label, I think Phonse would have approved of its rebranding.